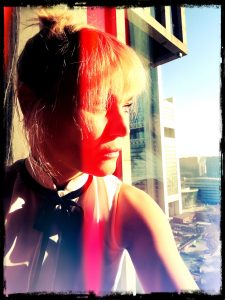 As living in China, Shanghai, for several years now, we want to show you China from a different perspective. We start with City Tours in Shanghai, because Shanghai is a breathtaking city. In Episode 1, we went to Tianzifang (田子坊, Pinyin Tiānzǐfāng). Tianzifang is a touristic arts and crafts enclave that has developed from a renovated traditional residential area in the French Concession area of Shanghai.

More information about Tianzifang you can find here: https://light-travelers.com/szeneviertel-tianzifang/

In Episode 2 of „Shanghai City Tours“, Brad and me went to the contemporary art district 50 Moganshan Road (Chinese: 莫干山路50号) or „M50“. M50 houses a community of more than a hundred artists whose studios are open to the public – so no fees for the entrance anywhere! The art district M50 is often compared with New York’s SoHo and Beijing’s 798 Art Zone. While walking around to find all the art studios, you will also discover many other interesting things and you can take a break in one of the bars or cafes which are also around the area.

The first artist, you see in the video is the wonderful Yelan. In case you want to know more about her and her amazing art, check out her website: https://www.yelanart.com/

The Shanghai Autoshow really impressed me a lot, this was especially true, not only because of the tremendous amount of cars being presented at the show, but also because of the ability with which China has been able to safely hold events of this size given our current global situation. In total, the week-long event attracted about 810,000 people, which is an astounding number.

This video I have taken for People`s Daily Online on a trip to Guangxi. It shows a tea ceremony in a traditional tea house in Guangxi Province China.

Guangxi is mostly famous for it`s bizarre mountains and rivers, the cities Guilin and Yangshuo. But it has much more to offer. Beihai 北海, is a city in the South of Guangxi at the South China Sea. The area receives about 2,000 hours of sunshine annually! This video shows the famous Silver Beach in Beihai.

This video I have taken for People`s Daily Online on a trip to Guangxi.